What a crazy weather we’ve had here in Copenhagen today. It feels like we’ve seen all four seasons in just a few hours. I almost didn’t believe my own eyes when it started snowing and storming, but now only a few hours later the sun is shining like never before. I’m longing for an evening walk along the canals.

So today I want to share with you a very special piece of pastry: A couronne. Couronne is French for crown, and the name refers to the shape of the pastry. A couronne can be a term for many different types of pastry – sweet as well as savory – as long as the shape is round (and of course pretty). The idea to bake this pastry took form a long time ago a day when I was watching The Great British Bake Off . Nothing unusual there. The unusual thing was that this time my boyfriend was watching it with me. Ha was crushing big time on the couronne that they were baking on the show. Several times during the show he exclaimed that we HAD to try to bake this couronne together.

The baking process went even better than expected. Vi had such a great time and it was quite the joy to share the baking experience together. I also quite enjoyed bossing him around 😉 When evaluating the couronne know, I have to admit that it could have been prettier. The original plan was to make it round with a big hole in the middle, kind of like a doughnut. But for some reason our couronne turned out very chubby without the space for a whole. But whatever, the taste was devine – hole or no hole.

I found the recipe on The Great British Bake Off’s website but I changed it to adapt it to what is available in Danish supermarkets. 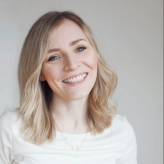